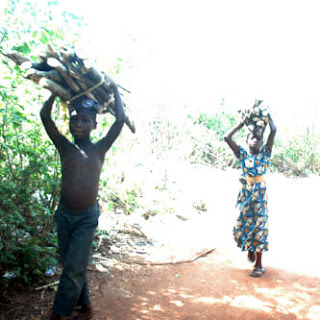 What is extreme poverty? I don’t have a theoretical definition but i can give you a practical picture- At the age of 3 his short life had been an unending chain of misery, but now his suffering was almost complete. The starvation that racked his fragile body was slowly shutting down his vital organs. His young mother, Jemila, sat in the dirt rocking him gently in her arms as she softly wept. She too was ravaged by the effects of hunger but although weak and lethargic she couldn’t bear to let go of her young son. This would be the second child she had lost to poverty. Her little girl had died 18 months earlier from pneumonia and now she instinctively knew she was saying goodbye to her precious son – Now that is extreme poverty.

Can we do anything about it? Yes! Though I have realized that our failure as humans (government, individuals and organisations) to take up our responsibilities have result in our act of ignoring 10,950,000 human beings who needlessly die each year from extreme poverty.

What are the barriers to ending extreme poverty? I could decide to mention a million barriers but i will like to say it all comes down to these; War, injustice, poor governance and lack of compassion.

Why should we care? 30,000 human beings will die today from extreme poverty, among them there will be many heroes who could solve problems associated with health, environment or technology if they were alive.

Government needs well targetted interventions which encourages citizen participation, this intervention must be focussed on agriculture, healthcare, education and infrastructural development- all officials should be transparent and accountable, and all forms of corruption should be named and shamed. Our failure to recognize the equality of every person on earth results in our ability to shrug our shoulders and turn away as 10,950,000 human beings needlessly die each year from extreme poverty. To us it is just a number. With the comfortable standard of living we enjoy, we don’t really understand the type of extreme poverty that kills more human beings each year than war or cancer.

We have no reference to that level of misery in our own lives so it is difficult for us to relate to the fact that more than 6 million children die each year just from hunger related causes. If the human race is ever going to lift a billion people out of poverty we are going to have to understand that we are all connected on a deep and meaningful level. We are going to have to realize that all people everywhere, no matter what their gender, are complete equals in every way. We are going to have to embrace the idea that we are ALL one humanity and we all need to love and respect each other.

In a war zone filled with armed conflict a small child sits in the dirt and cries out in a frail halting voice. Tears stream down her face, her stomach is bloated and her skin is cracked and bleeding as she tells the world, in the only way she can, that she is hungry.But this is not the kind of hunger you and I experience. This is not the momentary craving for our favorite dish. This is not the brief grumbling of a temporarily empty stomach – this is total deprivation. This is malnutrition so severe that the human body is ravaged. This is hunger that will kill a small child. If the world turns away, her life will come to a tragic end before she reaches the age of five. Another small grave will be dug and the vicious cycle of hunger will continue.

To simply try to survive in extreme poverty is to face death at every phase of your life.

The heat was over powering as the dust swirled around little Abasi. At the age of 3 his short life had been an unending chain of misery, but now his suffering was almost complete. The starvation that racked his fragile body was slowly shutting down his vital organs. His young mother, Halima, sat in the dirt rocking him gently in her arms as she softly wept. She too was ravaged by the effects of hunger but although weak and lethargic she couldn’t bear to let go of her young son. This would be the second child she had lost to poverty. Her little girl had died 18 months earlier from pneumonia and now she instinctively knew she was saying goodbye to her precious son. Another small gust of wind blew dust into her eyes, and she felt the grime as it stuck to the sweat covering their bodies.

EXTREME POVERTY IS THE DIRECT RESULT OF INJUSTICE.

30,000 human beings will die today from extreme poverty, among them there will be many heroes who through sheer bravery did everything humanly possible to make life better for themselves and especially for their families. Right now, 1.4 billion people in our world live in extreme poverty. Within a generation, we have the capacity to reduce this number to zero. Reducing poverty is not just a matter of economic development, in particular in countries with highly unequal patterns of income and wealth distribution, such as Brazil. It is also a matter of good governance with concern for the participation of the entire population in the development process for reasons of social justice and long-term development prospects. This approach calls for a responsive state which acts in partnership with a variety of social and economic actors. The sharing of information through dialogue – which may be controversial at times – can lead to more effective and efficient policies generally and, in particular, those aimed at poverty reduction.

Ten years have passed since the adoption of the Millennium Declaration, in which world leaders made a promise to the world’s poorest, most vulnerable and marginalized people. “We will spare no effort”, the Declaration reads, “to free our fellow men, women and children from the abject and dehumanizing conditions of extreme poverty. We are committed to freeing the entire human race from want”. That promise, as enshrined in the Millennium Development Goals, inspired great hope, led to a truly impressive mobilization of people around the world, and generated real and important gains in standards of living throughout the world.

Ten years of experience have shown that when strong commitments are backed by the right policies, adequate investment, and international support, remarkable progress can be achieved, including in the least developed countries. What we need are immediate, large-scale, targeted interventions coupled with long-term, well-planned and well-managed national development strategies backed by responsive partnerships for development and measures that promote longer-term structural transformation. We know that targeted interventions have powerful multiplier effects that can quickly improve peoples’ lives. Subsidized agricultural inputs for farmers. School meals for children. Conditional cash transfers to poor households. The elimination of fees for education and health care. These are the kinds of steps that can dramatically increase access to essential goods and services, and quickly alleviate the immediate plight of many vulnerable people.

We must pay particular attention to inequality, social exclusion and lack of participation.

The world has the knowledge and the resources to achieve all the MDGs. What is needed is decisive joint action. We need a clear agenda, with each actor — not just Governments but also other stakeholders — working efficiently, effectively and collectively.

MDG Target 1.A- Halve, between 1990 and 2015, the proportion of people whose income is less than one dollar a day

In conclusion i like to say ending poverty is the most effective way to lasting peace, security and social justice. I strongly believe that eradication of poverty is central to the elimination of diseases,gender inequality,malnutrition. Poverty hurts every human, it’s also d most threatening to children’s rights: survival, health and nutrition,education,participation and protection from harm and exploitation. it create an environment that is damaging to human developmnt in every manner; mental,physical and emotional.